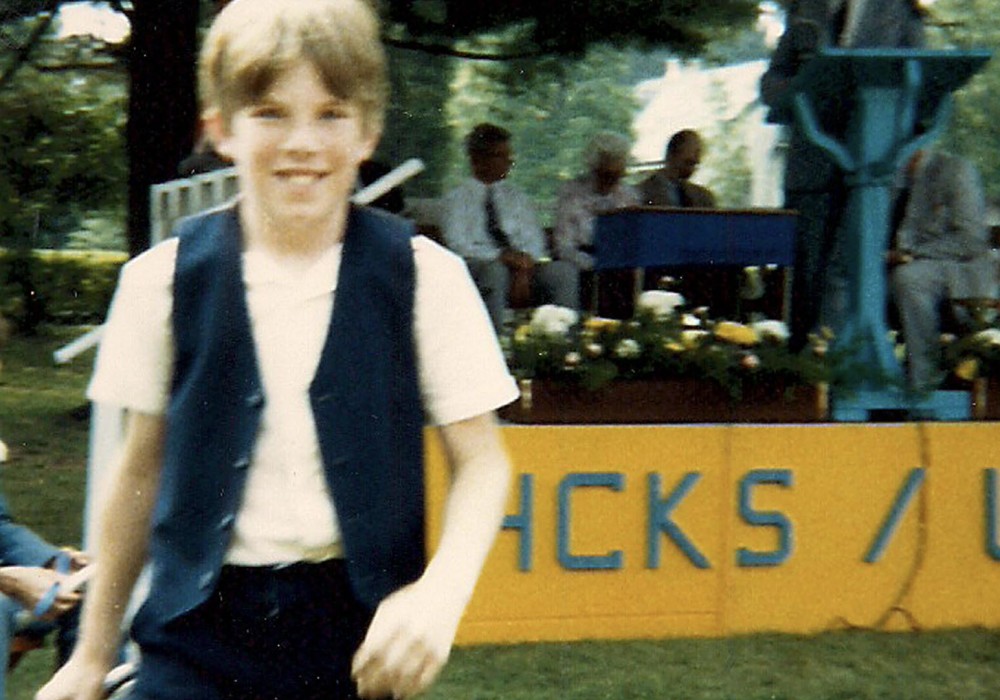 I have two kids: a son named Aiden and a daughter named Grace Vivian. Grace is always asking me where her middle name comes from and I have to tell her a bit of my story.

Back in 1983, my parents weren’t together. My mom had a lot of mental illness and my dad had drinking issues. There wasn’t a lot of stability in my household. I was 10 or 11 and already in a lot of trouble – minor stuff like not going to school and having no structure or stability.

I was in the New York Foundling Hospital in NYC, and then I was sent to live at Hawthorne Cedar Knolls, where my brother was. I remember when I was first sent up there, I wondered what I did wrong to be in this place. And it wasn’t anything I did—it was the circumstances of the situation I was in. But thank God in the 1980s there was a place that went, “Yes, we’ll accept you.”

Even though the organization was the Jewish Board of Family and Children Services, I’m Catholic and they took me to services based on that. They helped me get my confirmation and communion. I didn’t have a dime. And this organization put who knows how much money it costs—I was there for three years, and it’s not like my family ever gave them a dime. They just took people from any background and faith and put them in this remarkable place.

When I first got to Hawthorne Cedar Knolls, I was really behind in my academics, reading levels and mathematics, all that kind of stuff. And I got a lot of individual attention — Ms. Friedman was an elementary school teacher. And there was this wood shop that was run by a Mr. Canter. There was a lady there, her name was Vivian, she was like a counselor. What a difference she made in my life… and that’s why I named my daughter Grace Vivian.

We aren’t born with an owner’s manual. You can’t go “oh he’s truant” and turn to page 83. Certainly, more for the parents, if they have a lot of their own issues, instability, whatever. Putting a child in this situation is probably the hardest thing you could ever do. It was the hardest thing my mother ever did but it probably saved my life. It gave me an education, a little bit of direction, and helped me many years later. I had friends in my neighborhood who had similar issues, the same kind of dysfunctions, that ended up dead or life prison sentences.

What I learned at Hawthorne Cedar Knolls and the love I was shown has impacted me so many years later. The strength I gathered from the people there, they probably didn’t know how much they impacted me but they did. So what I have learned is: don’t give up, you’re not alone, and there are people who want to help you. This place is there for people like you. It’s what they specialize in, they repair families. The Jewish Board doesn’t advertise it like this, but it’s true: they’re in the saving lives business.

A Note From The Jewish Board

Tom initially reached out to us because he wanted to find Vivian and thank her for how much she helped him as a child. Our staff were incredibly moved by Tom’s decision to dedicate his daughter’s middle name to Vivian. Current and past staff members of our ​Westchester campus, which includes Hawthorne Cedar Knolls, worked together to find Vivian for him.

Sadly, Vivian passed away in 2010, but we were able to find Vivian’s daughter, Shirley, and arranged for them to finally meet in person at our 2016 Spring Benefit. We are incredibly proud of the impact that Vivian had in Tom’s life, and we were honored to help Tom tell his story and for Shirley to learn about the impact her mother continues to have in someone’s life to this day.

view other stories of hope